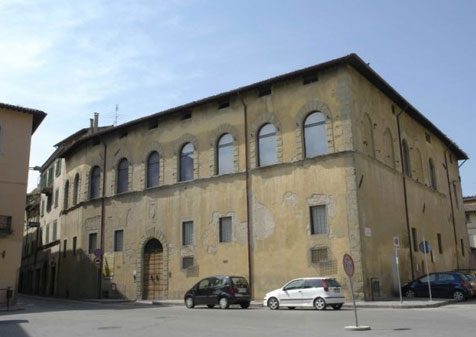 In Piazza Garibaldi we find the imposing Palazzo Vitelli a Sant’Egidio with its park, built by Paolo Vitelli (1519 – 1574). The architect is unknown, although some think to the Ammannati. The most interesting aspect of the building is the façade toward the park – to day a site of concerts and happenings – with its sixteenth century arches, delimiting it at the end, where we find the “Palazzina”, a gorgeous Renaissance building with its sixteenth century frescoes. Beside, there is Palazzo Albizzini – Raphael painted “The wedding of the Virgin” in 1504 for that family, once in Saint Francis Church, now in Brera Museum, in Milan.  Built in the second half of the fifteenth century, now houses the Burri Museum.  Across the square, we find the Monte dei Paschi’s building. The square links the old town with the new town. In the past, Porta Sant’Egidio could be found here, at the eastern end of the walls of town. The Vitelli family governed from thirteenth to sixteenth centuries.
The square is named after Giuseppe Garibaldi – his statue, placed at the center in the past, now is located in the nearby gardens.