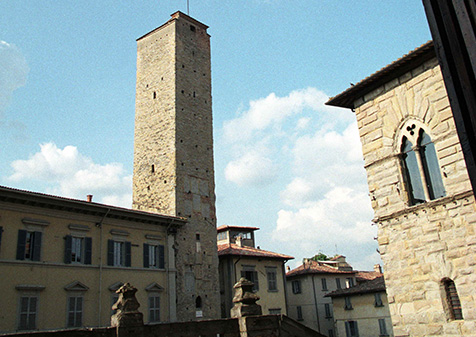 This part of town contains the most important religious and political buildings. We find the Cathedral, named after Saint Florido Bishop, patron saint of town. He lived in the 6th century and it is told to have helped rebuild the town after Totila’s destruction.
Then, the Town Hall, designed and built by Angelo da Orvieto (1322 – 1338), right next to the Cathedral. The façade is interspersed with beautiful double lancet window and an impressive main door with a lunette above it where the coat of arms of town has been placed. The V. Gabriotti Square houses these important buildings and is also home to the civic tower that stands next to the Bishop’s Palace, built at the age of the communes.
The Palazzo del Podestà, on Corso Cavour, is attributed to Angelo da Orvieto, also. It was renovated several times up to the seventeenth century and the alterations are clearly visible from Piazza Matteotti, Piazza Fanti and Corso Cavour. Città di Castello old town is unusual because it has two equally important squares (Piazza Gabriotti and Piazza Matteotti). Once entitled as Piazza delle Donne and Piazza Vitelli are now known to all as “Piazza de Sòtto e Piazza de Sópra”.