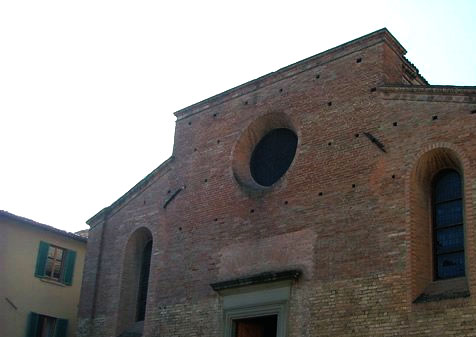 This church dates from the 13 ͭʰ century and is named after Santa Maria della Neve. When Niccolò Vitelli conquered the town in 1482 he decided to rebuild the church using the destroyed castle as building material. There is documentary evidence of this building dating from 1483 and 1509. The façade is very simple and is dressed with bricks and a cornice. The building was restored in the 1930’s under the guidance of mons. Giuseppe Malvestiti. A lot of baroque addictions were removed and the façade and the apse windows were renewed. The interior is rectangular and is divided into three naves. The pillars in the central nave form a cross-vault, and the stone vaulting-ribs are decorated with the shields and coats of arms of the Vitelli family. At the far end of the church is the apse and on each side there are rectangular chapels. These contain fragments of frescoes from the 15 ͭʰ century and a number of modern works. At one end of the left nave there is an elegant altar that dates from the 1440’s. There is a font and the painting by Alessandro Bruschetti Baptism of Christ (1939). Next to that we can admire Nemo Sarteanesi’s painting of Sant’Emidio said to protect the town from earthquakes. The fresco in the apse is by Alvaro Sarteanesi and depicts the Madonna di Loreto (1950). In the last alcove on the right we find Aldo Riguccini’s painting Saint Carlo Borromeo and the plague victims (1943). Behind the high altar we can see the choir stalls that were once in the Ognissanti monastery. They were made in the second half of the sixteenth century for Beatrice Vitelli who later became a nun.