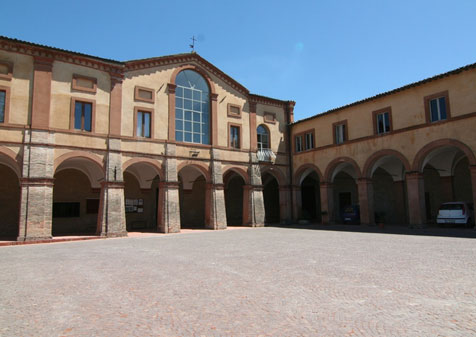 When we get out from the old town, through Porta Santa Maria and along Viale V. Emanuele Orlando as far as the fork for Pietralunga, we find the Convento di San Giovanni Battista dei Padri Minori Osservanti, also known as the “Zoccolanti”. The church sits on a small rise and was built between 1473 and 1529. It was renovated several times in the seventeenth and eighteenth centuries. The façade and the porch were designed by Nicola Barbioni in 1687. Bishop Giulio Vitelli contributed to the earliest construction and the main door and cloister can still be seen. There is a well conserved cistern with an inscription and a date –DOMINUS JULIUS DE VITELLIS MDXXVI. Many of the glazed terracotta pieces by Andrea della Robbia, now in the Pinacoteca Comunale, come from the church. There is a copy of Donatello’s San Giovanni that was made in 1457 for Siena Cathedral, under the porch, on the façade. The whole building demonstrates how the people of Città di Castello loved the Francescani and important local families gave them their protection. It is said that Angela Rossi, dei Conti di San Secondo Parnese, Vittellozzo Vitelli’s mother, had the road to the convent built in one night.