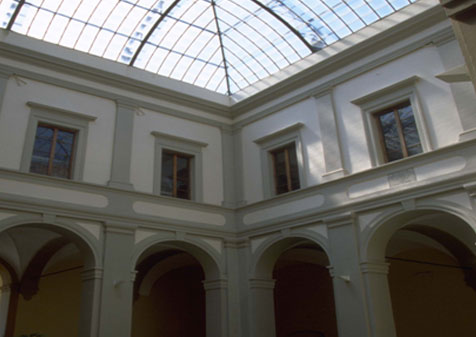 Palazzo Bufalini is found in Piazza Matteotti but the main façade is in Piazza Andrea Gota. It was built by Giulio Bufalini and Francesca Turina and the architect was probably Jacopo Barozzi, called “Il Vignola” (1597 – 1573). As the façade had not been completed Tommaso Catriani finished the job in 1767. The porch was built at the end of the sixteenth
century and modified in 1877. The façade in Piazza Matteotti was completed in 1899 when the church of San Fortunato was demolished to create new spaces. In 1873 the palace became the home for the “Circolo degli Illuminati” and many important cultural event were held there. The Quadrilatero has recently been restored for the same purpose. The glass and metal roof that covers the arcade on the ground floor was added between 1905 and 1908 and the space now houses the Tourist Information Centre.