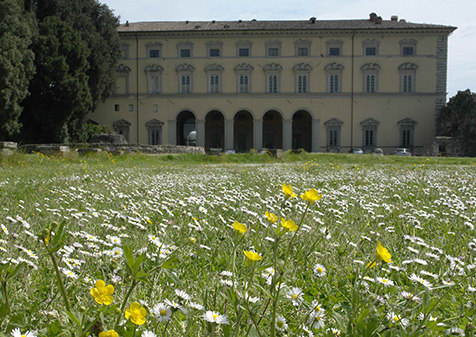 This splendid palace was built in the mid 1500’s for Paolo II Vitelli (1519 – 1574). He was a famous leader who worked for Farnese di Parma and the Emperor Carlo V. There is a tall porch on the garden façade. The five arches were originally supported by columns but having been damaged in the 1789 earthquake these were incorporated into large pillars. The spacious vaults in the entrance hall and the porch follow a traditional Tuscan pattern. The architect in unknown, but some people cite Ammannati as the master. To get to the first floor we go up a wide staircase and can admire the frescoes of Prospero Fontana on the vaulted ceiling. The main hall was originally much bigger but was damaged by fire in 1686 and rebuilt on a smaller scale. The walls are decorated with paintings of the Vitelli family’s achievements. Fontana, Cristofano Gherardi. Orazio Smacchini and Pomarancio all worked here. There is a series of rooms with splendid painted, lacunar ceilings and others with vaults and plaster decorations and sixteenth century paintings. The palace overlooks an oak wood and a nymphaeum where there was once a splendid Italian garden which reached as far as the town walls. In the distance we can see the Palazzina Vitelli that was built around a medieval tower. The arcade was painted by Fontana and shows scenes of mythology, landscapes, fruit and flowers.