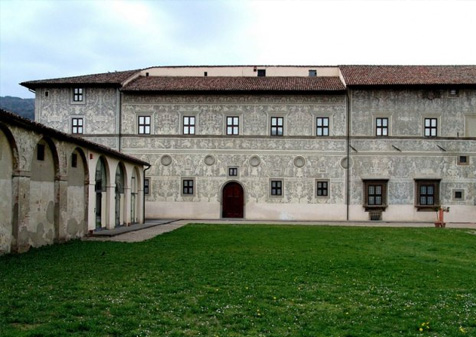 In 1912 Elia Volpi, a famous painter and antiquarian, donated Palazzo Vitelli alla Cannoniera to town and the Pinacoteca Comunale was housed in its elegant rooms. The building dates back from various periods but was finished in the first half of the 16 ͭʰ century and holds the name from the foundry and cannon store that were nearby. It was built to celebrate the wedding of Alessandro Vitelli with Paola Rossi from San Secondo Parmense and is a splendid example of a renaissance villa. Important feature are the graffiti decorations on the garden façade, carried out by Cristofano Gherardi, called il Doceno, using Vasari’s designs. There are masks and cupids, plants cornucopias and birds alongside the shields and symbols of the noble family of Vitelli. There are splendid frescoes on the main staircase that leads to the first floor. Among the symbolic decorations we find Sybil and the Prophets, Apollo and the Muses, scholars and Emperors of past. These were all painted by Cola dell’Amatrice and Gherardi. This is the second most important collection of paintings in Umbria. The subject of many works is of religious  kind because mostly come from churches and convents of the area. They show how well Città di Castello was placed, as a crossroad for cultural exchanges. The oldest painting in the museum is the large panel by Maestro di Città di Castello, a  Duccio di Boninsegna follower. It is called “Madonna in trono col Bambino e sei angeli”. There are also works by Spinello Aretino, Giorgio di Andrea di Bartolo, Antonio Alberti di Ferrara, Neri di Bicci and Antonio Vivarini. The only work made by a goldsmith is the Reliquary of Saint’Andrea arm which dates back to 1420 and is attributed to Lorenzo Ghiberti, a Florentine sculptor.

It is a rare example of 15ͭʰ century craftsmanship and is notable for its size and high quality. It is made of gilded copper and embossed silver. There are also important works by Luca Signorelli who worked in Città di Castello between 1474 and 1500. The oldest one is a fragment of a fresco of Saint Paul that was painted by the young Luca on the outside wall of the Torre civica. The large panel of the Martirio di S. Sebastiano was painted in 1498 and comes from the church of San Domenico. It was this painting that inspired Raphael and his drawings based on this work can be seen in Oxford and Lille. He worked in Città di Castello between 1500 and 1504 and painted the “Sposalizio della Vergine” for the Albizzini Chapel in the church of San Francesco. It is now on display at the Pinacoteca di Brera in Milan. The only work by Raphael that has remained in the town is the “Gonfalone della Santissima Trinità” (1501 – 1502). Another masterpiece on display is the small panel attributed to Cosimo Raselli called “Cristo benedicente con i segni della Passione”. There is a fine collection of works by Della Robbia mostly from Andrea’s workshop. In 2005 the new wing of the museum was opened to house three important donations: the Elmo Palazzi collection, the Bruno Bartoccini bronzes and the Ruggieri Collection. Works by 20 ͭʰ century masters such us De Chirico, Carrà and Guttuso can be admired. In 2012 the Pinacoteca Comunale was given the title of Meraviglia Italiana by the Forum Nazionale dei Giovani. 1f large paintings that Alberto Burri created between 1979 and 1993 are on display in the Tobacco drying rooms. These vast constructions were built in the 50’s for drying the tropical tobacco that was grown locally, but they stopped being used in the 70’s. Burri used them as a workshop from 1978 onwards. In 1989 the Fondazione bought the entire area and in 1990 the museum space was opened to the public. The big pavilions are all painted black as Burri wanted and contain 128 large works that are divided into series: The journey (1979), Orsanmichele (1980), Sestante (1982), Red and Black (1983-1984), T Cellotex (1975-1984), Annottarsi (1985-1987), Doesn’t love Black(1988), Large Blacks (1988-1990), Metamorfotex (1991) e Black and gold (1992-1993).