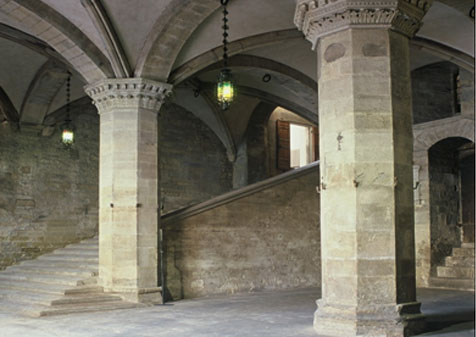 The Palazzo del Comune also called dei Priori (Town hall) is one of the most important public buildings in Umbria and it is both solemn and elegant. Construction began in 1322 but was interrupted in 1338 after the first row of twin lancet windows had been completed. The town’s coat of arms is carved above the main door and the architect’s name can just be seen on the lintel, Angelo da Orvieto. He was working on the Palazzo del Podestà and the Palazzo dei Consoli in Gubbio at the same time. Above the other door we can see the carved figure of “Justice”. The façade is made up of rustic ashlarwork using local sandstone. There is an imposing entrance hall and the vault is held up by two powerful, octagonal pillars. There are capitals and rectangular ribbing that form the rib-vaulting. Going up the wide staircase we come to the Sala del Consiglio and we see fragments of frescoes and numerous roman epigraphs that give us an idea of what life was like in the Tifernum Tiberium. There is also the impressive statue by Elmo Palazzi (1871-1915) called Allegoria dell’Umbria. In the next room, the Sala Giunta, there are a number of mementoes of Garibaldi and painting by Vincenzo Barboni Martirio di San Lorenzo.