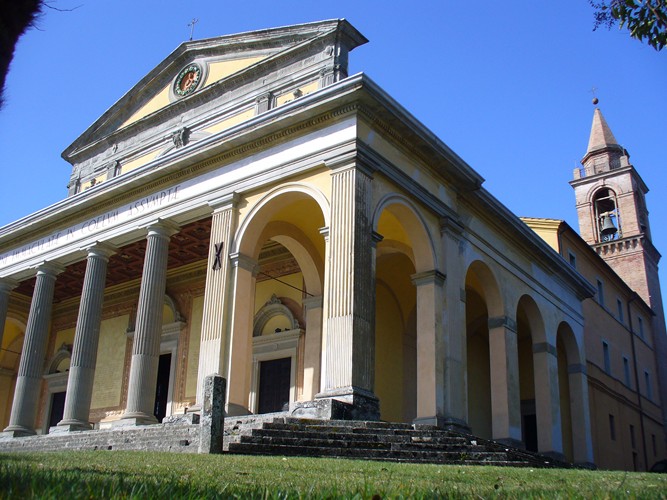 The Basilica della Madonna del Transito at Canoscio is on the site of a small chapel which Vanni di Jacopo built in 1348. There was a painting representing the Madonna when she went from earthly life into glory. The only part of this picture  still visible is She sleeping. The artist is unknown. A first church was built in 1406 and the local people came to ask for healing from convulsions. This small church was demolished in 1855 when construction work began on the sanctuary we can see today, designed by the architect Emilio De Fabris (1803-1883), better known for the imposing Gothic facade of Santa Maria del Fiore, in Florence.

The fine new building was consecrated in 1878. The interior has three naves with a sixteenth century style. The façade, designed by the Florentine architect Giuseppe Castellucci, was inaugurated in 1905. The porch is decorated with a lacunar ceiling in 1998. The shrine is given the title of Basilica Minore.

There is another church near the Basilica called the Pieve dei Santi Cosma e Damiano which dates from the 12th century. It is rectangular with a single nave and a semi-circular apse. The façade is in sandstone and on the left is the bell-tower. The interior has a tie-beam ceiling and a series of frescoes of sacred subjects all painted by local craftsmen. One of the most interesting ones is to the right of the main door where we can see the Madonna della Misericordia e Santi (1348). There is a representation of the Trinity with three heads, on the left. There are also a number of nomadic pieces, such as a stone block with a carved cross that has been used to hold the altar up.

Visit the site >>
Reach this place >>