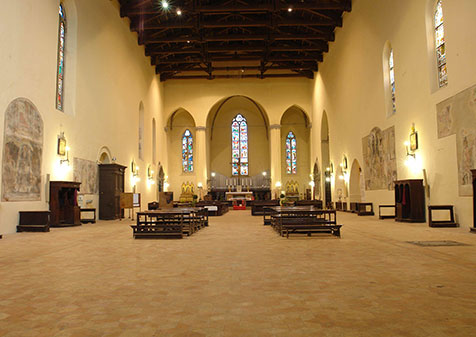 This is a severe and imposing structure. It has a single nave and the roof beams are visible. The choir is in the form of a cross. Work began in the 14 ͭʰ century and was concluded in 1424. The façade is unfinished and on the lefthand walk we find the bell tower and the ogival arch which are evidence of the skills of the local workmen in the 1300’s. There are many 14 ͭʰ century frescoes that came to light in 1911 when work began to remove much of the baroque decoration that had been added. On the left, beside the side door we find Sant’Antonio Abate (1426) which has been attributed to Antonio Alberti. On the opposite wall is the Crucifixion by the same artist. Further along we find three chapels with ogival arches. One of these is dedicated to war victims and has a 14 ͭʰ century fresco that represented The crucifix between the Virgin and Saint John.

At the far end of the nave there were two authentic masterpieces: Raphael’s Crucifixion that was painted for the Gavari family in 1503 and is now on display in the National Gallery of London; and Signorelli’s Martyrdom of Saint Sebastianthat was painted for the Brozzi family in 1498. This is now in the Pinacoteca Comunale. The body of Beata Margherita (1287 – 1320) is conserved on the high altar. She was known as “la cieca di Metola”, the place where she was born. There is a fine wooden choir that was carved and inlaid by Manno di Benincasa, called Manno dei Cori, in 1435. The sixteenth century cloister stands next door and was part of the convent. It has a double row of arches and work was completed between 1662 and 1667. The lunettes show frescoes of the miraculous life of Beata Margherita. There are two triple lancet windows and a trilobite door below the lower arches which give light to the domenican “Sala Capitolare”.