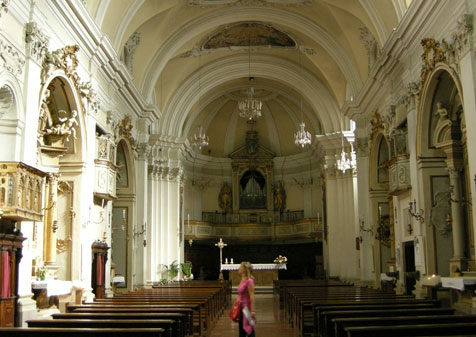 The church of Saint Francis was consecrated in 1291and through the years has been altered and modified many times. The three polygonal apses date from the earliest period as does the righthand wall where we can admire the double lancet windows and the original arch. The interior has the form of a latin cross with a single nave and was completely transformed in the baroque era between 1707 and 1727. The plaster moulding was carried out by Antonio Milli and the medallions in the Vault were painted by Lucantonio Angiolucci representing San Francesco, Sant’Antonio e San Giuseppe da Copertino. At the far end on the left we find the Vitelli chapel that was designed by Giorgio Vasari in the mid 1500’s. There is also a large panel by the same artist entitledCoronation of the Virgin (1563). It was commissioned by Gentilina Della Staffa Vitelli, mother of Paolo and Chiappino who are both buried here alongside Nicolò Vitelli who died in 1486. The choir stalls were produced by the same craftsmen who had worked in the Cathedral. We can see decorations representing the life of Mary and Saint Frances worked in inlaid wood that has then been redefined with indian ink. The wrought iron gate was made in 1567 by Pietro Ercolani.

Further down the nave we find a glazed terracotta piece from the Robbian school that represents Saint Francis receiving the stigma. On the altar dedicated to Saint Joseph there is a copy of Raphael’s Wedding of the Virgin that was removed by the Napoleonic troops in 1798. The original is now conserved in the Pinacoteca di Brera in Milan. The high altar dates from the 14 ͭʰ century and is attributed to Beato Giacomo, an important friar sculptor. There are beautiful 17 ͭʰ century choir stalls in the apse and above them we can admire the mechanical organ that was installed in 1763 and is still used for concerts. In the chapel on the right of the presbytery we find a painted stone Pietà of the German school that dates from the 15 ͭʰ century. The reliquary of Saint Andrew’s arm created by Lorenzo Ghiberti was once conserved in one of the chapels, but is now in the Pinacoteca Comunale.