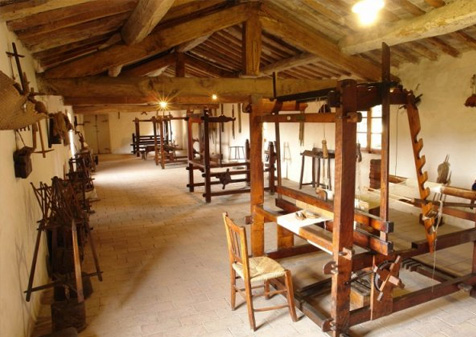 Opened in 1974 by Regione Umbria in order to maintain folk traditions and culture, you can catch here a glimpse of country life of the past and see the objects and instruments of daily life. There is a blacksmiths on the ground floor with a magnificent leather bellows. There are stalls – with the various tools – the cattleman used, and there is a wine cellar with a wooden press. Another room houses the olive oil mill with its press and its millstone. The big kitchen is on the first floor with a big fireplace and various cooking implements. There is also a bedroom with its bedside tables and pictures of saints on the walls. Up in the big attic there is a collection of agricultural implements that were used for harvesting grain and a number of looms that were an essential part of family life. This museum gives us an idea of what life was like and helps us understand folk traditions.

The museum at Garavelle is housed in the farmhouse near Marchese Capelletti’s Villa. It was created in 1974 by the Regione Umbria, the Cassa di Risparmio and the town council of Città di Castello. It is one of the many projects that have been set up to keep the folk traditions alive and it clearly shows how the agricultural workers had to fend for themselves in every way. This “museum” which has been created in a typical Valtiberina farmhouse has a blacksmith’s shop on the ground floor. There is a beautiful leather bellows as well as a forge and all the tools of the trade – hammers, pliers, tongs etc. You can also see the trave for shoeing the horses. Other farmers’ implements can be found in the stables such as the yokes, the baskets, the harness and tackle and the forage cutter. Moving on to the cellar there is a display of flasks and barrels and a number of very unusual presses while the oil mill contains a huge eighteenth century press and millstone as well as oil jars and amforas. The big kitchen for the traditional patriarchal family is up on the first floor. It has a fireplace that is blackened by smoke like the ceiling, and bunches of grapes that have been hung up to dry out so they can be made into vinsanto. Old fashioned cooking implements are scattered around. There are sieves , graters and strainers and near the fire you can see the “pot” for the laundry. It used to be drawn by oxen either to the spring or the river. There is an iron bedstead in the bedroom with two bedside tables and pictures of saints on the walls. The sheets and blankets were made on the looms just like the nightshirts and other clothes that have been spread out on the bed. Up in the big attic you can see the implements that were employed for the grain harvest and in another room the looms that were used by the families for their clothing and household linen. There are also spools, bobbins, shuttles and spindles which were all needed for spinning and weaving Each historical object is in its proper place and visitors find themselves transported back to a forgotten world not at all like the one they live in every day.

Closed on Monday, except on Holidays and the day before.

Get to this place >>