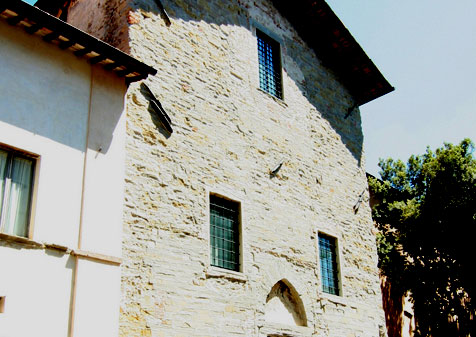 The followers of Saint Claire have a long and complicated story in Città di Castello. Many female convents, including some Benedictine ones decided to follow the order of Saint Claire. These gradually became unified in a single convent called Santa Maria in Trastevere which was probably situated near Casalsole just outside the town centre. It was in quite a dangerous position and was burned down twice. In 1411 the convent was moved to the church of Santa Lucia, inside the town walls. Then in 1535 it moved again into the ancient buildings of San Giacomo alla Scatorbia where the Clarisse lived. They were known as the “Enclosed of Saint Claire” and they stayed until 2005. The monastery church that was once dedicated to San Giacomo has been modified many times but the main façade in Via XI Settembre still clearly shows its norman-gothic character. The entrance in Via dei Lanari has a sixteenth century ramp that is well preserved. There is a main door and on its left in the “Porta del Pane” and on the right the wheel. The Suore Francescane dell’immacolata live there at the moment.