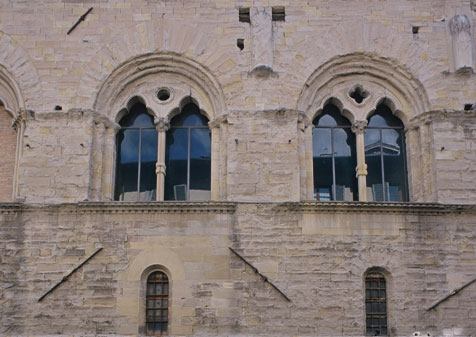 This is an important public building that Angelo da Orvieto designed in the fourteenth century after having worked on the Town Hall. It was commissioned by Tarlati di Pietramala and completed in 1368 when five of the new workshops on the ground floor were rented out. Several different architectural styles can be seen and rows of polished stone have been inserted. In the lunettes above the workshop doors we can just see the coats of arms of the “Podestà” who governed the town. There is a wide arch that indicates the main entrance to the palace and leads on to the piazza on the other side. There is a small window above each door and above them there are a series of beautiful double lancet windows enclosed in a semicircular arch. In 1620 the arcade that opens onto Piazza Fanti was added while the façade in Piazza Matteotti was re-structured by Nicola Barbioni in 1687.