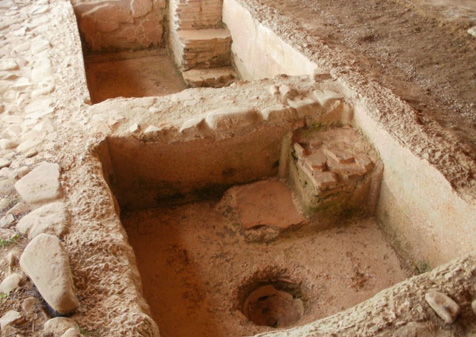 After 283 B.C. Rome had took over on the Umbrians. Città di Castello, under the name of Tifernum Tiberium, became part of the roman federation. The Augustan order included it in the VI ‘Umbra region’. Tifernum Tiberium was a prosperous minicipality until the end of the first century because it had a powerful leader in Pliny the Younger. He was full of admiration for the town and the surrounding countryside. The Tifernum territory covered the area now known as the Massa Trabaria and reached as far as the source of the Tiber, of Savio and Marecchia rivers. Probably the roman nucleus was in the south-west of the actual town and corresponde now to the Prato and Mattonata quarters. A mosaic, from the second century B.C. was found here together with some remains of walls and, possibly, an amphitheatre. Other finds have been displayed in the Town Hall. The sarcophagus on show in Pinacoteca – Municipal Art Gallery – dates from the third century and shows that the area had plenty of skilled craftsmen at work. There is documentary evidence of the presence of large villas, where slaves worked, and other smaller settlements.
In the imperial era the whole area benefited from economic stability and agriculture, viticulture, cattle raising, hunting and fishing were all practiced widely and timber transported directly to Rome. Following the Diocletian reforms (285 – 305 A.D.) the town became part of the province called “Tuscia and Umbria” and was directly governed by Rome. This occurred when the town was first evangelized and converted to Christianity after the martyrdom of San Crescenziano, at Pieve de’Saddi locality. The first “Episcopus Tifernas”, Eubodio, is cited in the fifth century but the most important figure in the town history at that time was Bishop Florido, during the era of Pope Gregorio Magno (540 – 604). It is said Florido helped the town back on its feet after Totila, King of the Goths, had destroyed it. Soon after this the diocese extended its power as far as Massa Verona (Pieve Santo Stefano e Monte Coronaro), to the Sovara Valley (Anghiari) and to the Pieve di Sant’Antonio (between Citerna and Monterchi, along the road that even then went to Arezzo). An excellent example of early Christian art (5th/6th century) was discovered in 1935, known as the “Tesoro di Canoscio” and now kept in the Museum of Cathedral.