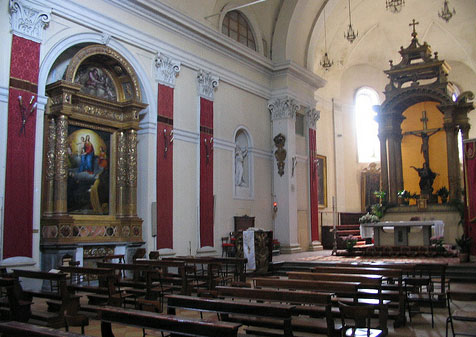 The church was built between 1363 and 1381 by the Padri Serviti and is now a shrine. Only the side door remains of the original gothic structure along with a few fragments of frescoes in the lunettes and the apse. The bell tower ,which was never finished ,is similar to the one at the San Domenico. It is built on four pillars and covered with alternating layers of bricks and stone. The building that sticks out into Via del Gonfaloniere is a sixteenth century addition to an existing chapel that had been constructed in 1489. The main door is richly carved and the work was done by one of Bernini’s student. The interior has a single nave. The baroque altars made of inlaid wood come from the church of San Domenico. There is a chapel in the transept that contains a fine fresco depicting the Transit of the Virgin and is attributed to Ottaviano Nelli It was completed in 1436 when the painter was also working in Sansepolcro. Opposite the chapel we find the Oratorio della Compagnia della Madonna. There is an altar with a small door that holds the picture of the Madonna and child between Saint Florido and Filippo Benzi. This is venerated as the “Madonna delle Grazie” and was painted by Giovanni da Piamonte, a follower of Piero della Francesca. The population of Città di Castello was only able to see the picture twice a year, on the 26 ͭʰ August and on the 2nd February, but recently it has been on show the 26th of every month. There are also two paintings by the local artist Giovanni Ventura Borghesi. On the right we can admire Christ heals the gangrene of San Pellegrino and in the sacristy we see The Virgin and the seven founders of the ordine dei Serviti(late seventeenth century). There is a convent next to the church which housed the “pellagrasario” in the last century and in more recent times the Psychiatric Hospital of Perugia.